“The Delta has won more rallies than any other car. It exudes allure. Back in our racing days, every young man wanted one to show off in, their fathers wanted one, their mothers too! Everyone loved it. It was the last truly great Lancia. Since then, there’s not been a single Italian car (or driver) to cheer on at rallies and so, as soon as I retired from racing, she passed into legend”.

Seventeen world championship wins, forty podiums and two world championship titles: a legend, just like the car that brought him so much success (and vice versa, of course). Miki Biasion, a Club Italia member himself, dominated the era’s Group A competitions, the perfect battleground for this saloon car of unrivalled racing potential. And in the early 1990s, when Club Italia started talking about creating a first limited edition for members only, the Delta era was still in full swing. In 1992 this wondercar won its 6th world title. And that same year, Club Italia unveiled its own, very special Delta. Which, like its forerunner, was epoch-making.
Just 15 of them were built, each lovingly customised and individually numbered; the Lancia Delta HF Integrale Evoluzione 16V Club Italia was a heartfelt tribute to the original Delta, a car that had conquered all, including, incredibly, the last six Constructors’ titles in a row (1987, 1988, 1989, 1990, 1991, 1992). It also scored four World Rally Drivers’ Championships, two with Miki Biasion (1988-89) and two with Juha Kankkunen (1987 and ‘91). However, it should be pointed out that the 1987 model was the Delta HF 4WD, while from 1988 onwards it was the Delta HF Integrale, the model on which the Club Italia special edition was based. So the calculation should really be adjusted to five constructors’ and three driver’s titles: but that’s just splitting hairs.
The task of developing the Club’s limited edition fell to Marcello Pochettino, then Lancia Product Manager. The goal was to take a car that had dominated rallies like no other and put it in ‘evening dress’ to highlight both its flair and racing pedigree. For Lancia itself, this was the first time they had embarked on such a bold initiative.

The Delta HF Integrale Club Italia was an extension of the Club’s philosophy and aligned perfectly with the mission of cultivating the image of Italian cars worldwide. With respect to the standard model, it features several modifications, such as the iconic Lancia dark blue paintwork and personalisation in the form of two enamel Club badges. The interior offers stylish Recaro seats, of a more ‘embracing’ design than their standard counterparts. The seats, like all the finishing elements, are lined in burgundy Connolly leather with a thermo-stamped HF logo.
From a technical viewpoint, the most unique feature on the Delta Club Italia is the Start button, embedded in a carbon fibre mount. The gear lever has also been modified to include a spherical black knob and lowered bellows, again mounted on a carbon fibre support. A new filler cap with a flush aluminium flange was also added.
Under the hood, the eye is immediately drawn to the tappet cover – painted in the classic yellow-blue of the 1970s Fulvia HF – and the adoption of a brace connecting the suspension strut towers. Each of the 15 Delta HF Integrale Club Italia cars has two plaques, one near the gearstick, the other under the hood. These limited edition identifiers show the progressive serial number and pair the Lancia and Club Italia names. The plaque inside the engine compartment is also inscribed with the owner’s name.
As stated, this exclusive limited edition built by Lancia for Club Italia pays homage to the Delta: a car that, more than any other, contributed to Italian motor sport success throughout the 1980s and ‘90s and acted as a global standard bearer for Italy’s distinguished car industry. 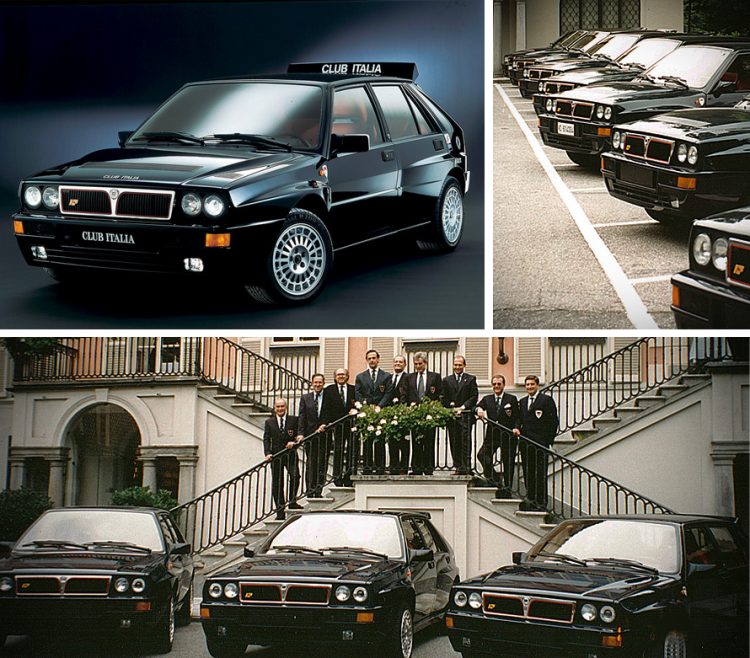