“The Club Italia Ducati Scrambler is stunning. We’ve created something truly special. Making so few of them is a sin. However, it’s a collector’s item and rare it must remain. That said, I recommend the owners get out there and ride them”.

Talk to the dust. Ask it about Camilla and Vera, about Arturo Bandini and John Fante, about the roar that ripped apart the still air of the Mojave desert. Ask it about the tyre which lifted the sand as if it were a curtain in some legendary theatre where men get to grips with their i-n-e-v-i-t-a-b-l-e passion for all things engined. To understand how all this came into being, we need to go back half a century (and a few eras). Back to when a group of youth-fuelled friends stripped some old English bikes down to the essential and fitted them with knobbly tyres to race in a straight line over the desert sands… at full throttle of course. It was the start of something that’s still seductive today. And that something has a name. Scrambler.
In 2015 Ducati dusted off one of its past legends, the Scrambler. It was pure 1960s, all metal and chrome, a bike that defined an era and lodged itself in the heart of anyone who ever owned it (or dreamed of owning it). Hence the arrival of a new Scrambler, now with an extra cylinder in keeping with Ducati twin-cylinder desmo tradition. A powerful package of heritage and modernity, a bike that is many things but, above all, an ode to freedom. And on that basis, 25 years on from the first Club Italia Ducati, another two-wheeled icon (just 20 have been built) was created for the Club’s members: the Scrambler 1100 Sport Pro Club Italia.
The father of the project was Andrea Ferraresi, director of the Ducati Style Center, a man who takes the dreams of ducatisti worldwide and makes them real. The 2015 Scrambler is his brainchild, and the Club Italia edition is its exclusive sibling. “Today’s bikes are chameleons”, explains Ferraresi. “New segments and ever-more versatile hybrid versions abound. Customisation now forms the bedrock of motorcycling. In this sense, Ducati’s iconic Monster is perhaps the world’s most customisable – and customised – bike. Sometimes we build limited editions, sometimes one-offs. We co-design with the clients, literally building the bikes with them to get colour, seat material, every detail, every last touch just right. This is one of the things I love most about my work: building the bike with the client. The one made with Club Italia has ‘exclusive’ written all over it. And the seat, I think, is nothing less than a work of art”.
The Scrambler built for Club Italia is fabulous: titanium Termignoni silencers, customised Poltrona Frau red leather seat, metallic blue tank with the Giugiaro logo, a limited edition number plaque and refined mechanics dominated by Ducati twin-cylinder desmo tradition.
Perhaps none of the members will be riding it across a desert (least of all the Mojave), especially with a horsepower that would once have powered Barry Sheene to victory. But they would if they had the chance. And that’s what matters.
So what to wear with it? If you’ve got the physique for it, a white Fruit of the Loom tee, Levi’s jeans, desert boots (non-designer) and a Bell helmet will do the trick. Otherwise, you can get away with a Belstaff or a Barbour, as long as they’re a bit worn (even better if second hand) or vintage. You could, though, go for beige Baracuta, even brand new, with matching Sebago loafers or brown Burwoods. Does that look remind you of anyone? You bet: good old Steve. The man who, with his desert-style Bonneville – not to mention his piercing blue eyes and sculpted Hollywood body – reinvented motorcycles, sprinkling them with his stardust in a way that still makes them so appealing today. And if anyone frowns or, even worse, says “Oh no, not McQueen again…” just ignore them. They’ve lost their mojo. Some things are like sex: they’ve been around forever, but if you put passion into it, it’s always the first time. 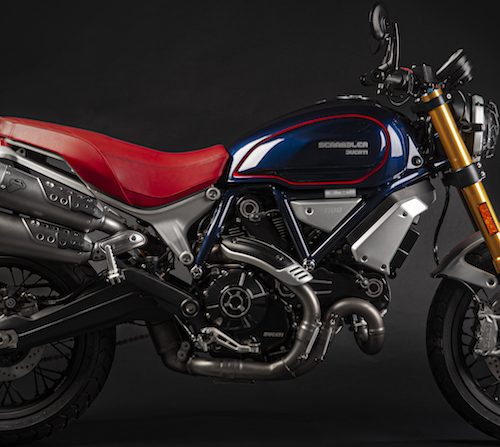