“[Bianchi bicycles are] among the most beautiful, purest of sculptures; their lines express the coiled power and dynamism of a bull in the arena”.

Perfection, albeit without an engine. That aside, the bikes Bianchi dedicated to Club Italia in the year 2000 are perfectly in keeping with the Club’s dictates: Italian, iconic, the best technology of the day.
A long time in the making but with results that made the wait well worth it, the Bianchi-Club Italia project pays homage to a bicycle that is rare to the point of being unique, a hallmark of Italian creativity and technological excellence.
The Bianchi brand is far more than a mere chapter in the Italian – and global – history of cycling. It is, rather, an integral part of it, an icon steeped in prestige. Throughout its 130-year history, the Bianchi name has been synonymous with racing success. Bianchi bikes have been the steed of choice for numerous cycling legends: Tommaselli, Girardengo, Coppi, Gimondi, Argentin, Bugno, Berzin, Marco Pantani and today’s heroes. Racing triumph has always gone hand in hand with technological innovation. Even the folding military bicycles built for the Bersaglieri Corps, with their wide tyres and twin shock absorbers, heralded the modern mountain bike (now used for more peaceful pursuits).
Three models were developed for Club Italia, each intended for a specific use: the City Bianchi-Club Italia bike in men’s and women’s versions, for cityscape and country touring; the Bianchi-Club Italia mountain bike, designed with younger people in mind, a classic cross-country model; the Corsa XL Aluminium Slooping Bianchi-Club Italia, which features the same technology seen on Marco Pantani’s state-of-the-art racing bikes at the turn of the century.
The bicycles feature the Club Italia logo. The owner’s name is hand-engraved on a special badge displaying the serial number. They also have a kickstand. Each bike was assembled at the Reparto Corse in Treviglio and built according to the applicant’s personal measurements. 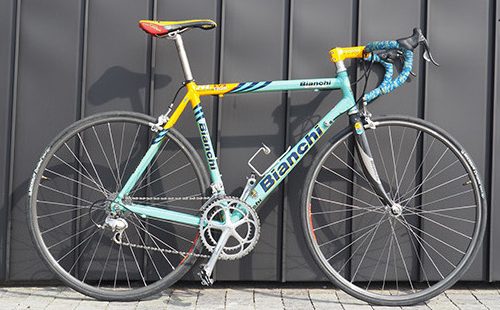