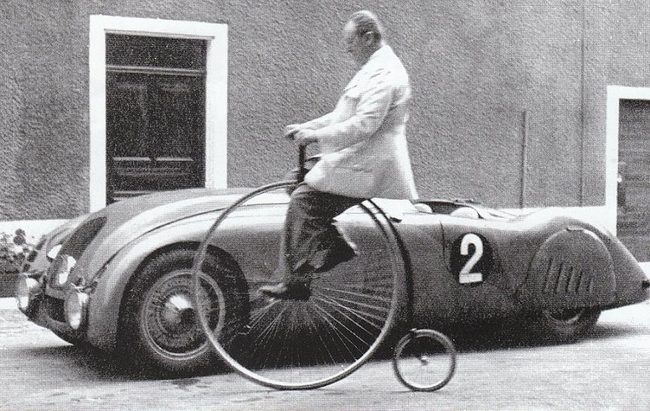 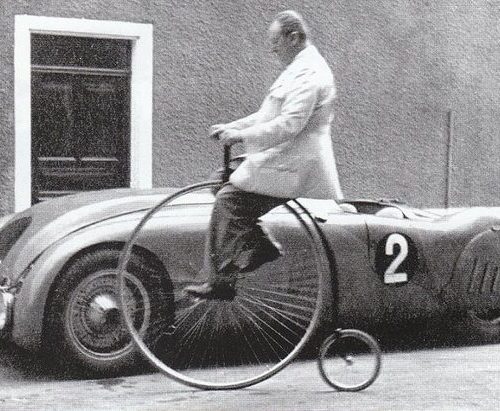 It could have been, should have been, another story; instead, what happened and destiny ended up in less creative hands.
The author of masterpieces such as the Type 35 Grand Prix, the 41 Royal, the 57 Atlantic and Atalante, Ettore Bugatti was, quite simply, a genius. As such he was both an icon of his day and a flagbearer of the future. And the man who had redefined four-wheeled luxury also had the strength, skill and genius to come up with one last project that was not just completely different from his previous creations but would have amazed the world and, perhaps, given his factory a huge boost by achieving what all the great car makers, Enzo Ferrari included, dreamt of: a car for everyone but with a unique identity.

World War 2 had a profound effect on both the company and Bugatti himself. Just before the start of hostilities, on 11 August 1939, he suffered a terrible blow: Jean, his eldest son and heir, was killed while testing a car. When, in early September of that same year, Hitler invaded Poland and France and Great Britain declared war on Germany, Bugatti had already transferred his factory equipment to a plant near Bordeaux, where he’d begun working as a defence contractor for Hispano-Suiza. In May 1940, the Germans took charge of the Bugatti factory in Molsheim and demanded that he return the machinery and equipment. Bugatti initially refused but the Germans forced the sale of his factory and he received 150 million francs. At the time Ettore was still an Italian citizen, so the Germans did not consider him an enemy. For four years, flying bombs, amphibious vehicles, torpedoes, motorized sleds were all manufactured at Molsheim. Ettore, meanwhile, worked in his Rue Boissière offices in Paris, focusing on other things.

Together with a group of engineers, he breathed life into several projects. The most intriguing was a small car… with a small engine. Could this be the ‘Bugatti for everyone’? Perhaps. Or if not for everyone, for many. Ettore knew the war would leave deep scars and that, to begin with at least, there would be little demand for the luxury, high-powered cars of the 1930s. Cars that had made him famous, such as the Type 57. He also realised there would be fuel shortages.

The one car designed by Bugatti during the war years was called the Type 68. It incorporated a small 318 cc engine. It was a gem. It had a 4-cylinder supercharged power unit. It featured twin overhead camshaft timing with four valves per cylinder. It could rev to 12,000 rpm and hold 9,500 rpm under load. In short, it was compact and refined. After all, this was going to be a Bugatti.

Initial testing was done on a sort of motorcycle, then on a small car, tested at the Bois de Boulogne by Roland Bugatti, Ettore’s fourth son. Further development led to rear-wheel drive, a four-speed gearbox, a weight of about 760 kilograms and roadster-like bodywork. After the war the engine was developed further, making it a 369 cc two-valves-per-cylinder model. Then comes a third, revolutionary version: four cylinders mounted on two parallel crankshafts (the extremities of the latter mounted two lobe compressors), a rotary cylinder head with one intake port and one exhaust port, both without valves, and just one spark plug. And on this basis, in 1946, 75 years ago, Roland registered patent number 632723. Yet it would all come to nothing.

After the liberation of France, the Alsatian factories were seized by the new government. As he was still an Italian citizen, Bugatti was now deemed an accomplice of Germany. A legal dispute arose. Sadly, Ettore died on 21 August 1947, little more than a month after the court ordered his assets be released from seizure and returned.

Under the guidance of his long-standing collaborator Pierre Marco, the factory threw itself into general mechanical manufacturing, producing metal frames, training grenades for the Navy, torpedo parts, castings for third party producers, spare parts for Citroën and a host of other mechanical items. In 1953 it employed 760 people, including 22 engineers. By then, the company, practically worthless in 1947, had an estimated value of 1.5 billion.

Automobile manufacturing resumed in 1951 with the 101, a modified pre-war 57 with an 8-cylinder 3.3 litre engine…
The Bugatti Type 68, though, was shelved. The only existing prototype is displayed in the Mulhouse museum.