“To enhance, preserve and study vintage and non-vintage Italian automobiles. This is the concept Club Italia was founded on. It’s the same concept that inspired us to develop the Club’s 25thanniversary project: the Alfa Romeo 4C Club Italia. A model set to be a huge success, one that will be on the wish list of every car collector”.

In 2015, under the presidency of Monica Mailander Macaluso, we marked Club Italia’s 25thanniversary (it was actually created in 1985, but the official founding was in 1989) by presenting the Alfa Romeo 4C Club Italia, a supercar of unique style and performance. This limited 17-car edition sported a vintage Alfa Romeo red livery, the colour used on the Alfa Romeo racing cars of the 1960s.
The aim of this particular edition was to emphasize the sports pedigree and essential splendour of the Alfa Romeo 4C. In keeping with that goal, the car made extensive use of performance-enhancing ultralight materials. These included carbon (for the roof, the front-end spoilers, headlight assemblies, rear spoiler and rear-view mirrors) and titanium (on the centrally mounted tailpipes by Akrapovič, a pioneering user of this innovative material in exhaust systems), resulting in weight savings of about 60% compared to standard components.
On the style side, we worked within the 4C concept, following the guideline “No concession to aesthetics is an end in itself”. Nevertheless, we sought to ensure that every single modification reflected the elegance and exclusivity that are the Club Italia hallmarks. Certain elements such as the carbon headlight assembly and rear-view mirrors feature a finishing touch that can only fill us with pride: the colours of the Italian flag, intended to point out that a car as gorgeous as the 4C could only stem from an Italian mix of technical excellence and panache.

These limited edition cars also feature enamelled Club Italia badges (on the front fender and, inside, on the passenger side of the dashboard). Towards the rear of the vehicle, the side panels sport the legend ‘4C Club Italia’. Lastly, each car was personalized with a special plaque on the sill (driver’s side) bearing the serial number.
The prototype presented to the members at the time was built by Carrozzeria Sonnino, a former Zagato partner, under the supervision of Paolo Sonnino. The guarantor of the project for the newly founded FCA was Marcello Pochettino, the Group’s Strategic Consultant and a former General Manager of Maserati. 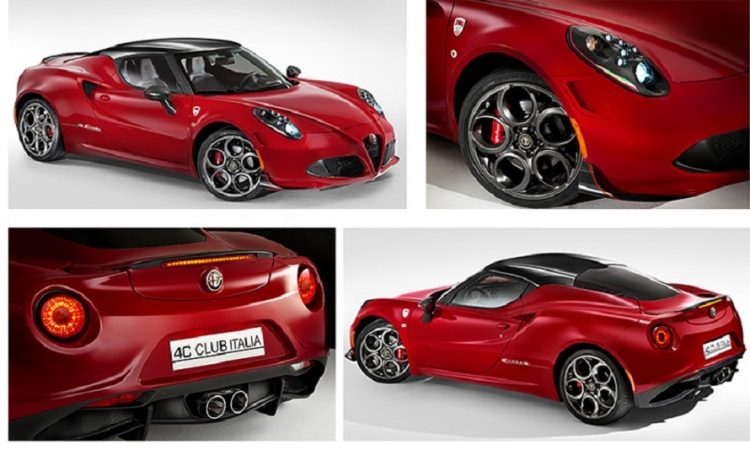